May 03, 2015
Buying a mattress is about as dull, and opaque, a consumer choice as any of us has to make.  You can't take your friends for a ride in (on) it, however much you like the color, it is quickly obscured, and you really can't test it out... in spite of the fact that you're going to spend a third of your life on it for a long time.

Ground tackle is like that.  You might get some cred for your choice of anchor (probably not), and every sailor loves to debate the virtues of chain and lay and scope and flukes

I purchased a new anchor, and obsessed for a time about the rest of the ground tackle.  My existing rode was a mere 200 feet of 1/2" triple strand nylon, and twice that will be barely enough for some of the more extreme Inside Passage anchorages.

Conventional wisdom suggests an eighth inch of rode diameter for each 9 feet of boat length (for a working anchor). That would be 3/8" line for Ripple, but 3/8" is hard to grip and haul, especially with 50 lbs of anchor and chain, plus the weight of the anchor line itself.  So I narrowed my choice to 7/16" and 1/2" three-stranded nylon.

These are by no means the only plausible choices.  What about braided nylon? Single braid? Double braid?  Three strand nylon offers elasticity (about 25% stretch).  Braided, about half that.  Every primer on anchor rodes extolls the virtue of elasticity to absorb energy and reduce shock loading.

Boat designer Steve Dashew alleges that less-stretchy polyester line minimizes some of the negative aspects of elasticity: with less stretch, the boat should do less sailing on the anchor in a blow.  The loss in elasticity can be accommodated by letting out more rode, which one would be inclined to do so in heavy weather in any case.  Apostasy or simply evolution of technique?

The bitter-end of Ripple's rode is made fast to the sampson post, so failure there would entail disintegration of the boat itself, in which case, all else is moot.  Estimating the loads suffered by the other components is non-trivial.

I came across a formula for determining wind loading forces on a sailing vessel, and worked out the numbers for Ripple:


Anything under 50 knots of wind is pretty clearly near or under the recommended working load limits (WLL) for triple strand nylon of 7/16 or 1/2 inch diameter (WLL is by convention 20% of tensile breaking strength load, though I have seen 'safety factors' as high as 12:1).  Assuming 5:1 safety factor, even the 75 knot winds are still roughly only 50% of the breaking strength load (for new line under test conditions).

Exceeding WLL is known to damage nylon rope, though the rarity of such events makes it unlikely that the anchor line would sustain such stress frequently.  A prudent climber replaces his or her rope after a single fall.  Perhaps the prudent mariner should do the same with an anchor rode that sustains more than a 50 knot night?

Factors favoring 7/16" nylon triple strand:
Factors favoring 1/2" nylon triple strand:
The dilemma is a common one in managing risk, cost, and convenience, and there is no perfect answer.  At the end of the day, you're asking yourself how severe an event (a storm or severe williwaw) you're trying to protect against, and how much in treasure and inconvenience you're willing to invest in this protection.

My friend Terry scoffed and said to stop fretting... the anchor set will fail long before anything else. Probably true.  I ended up with 400 feet of 7/16 rode plus the 20 feet of chain.  I will have the old anchor, the old rode, and the kedging anchor rode in reserve to deploy in the case of a big blow.

Popular posts from this blog 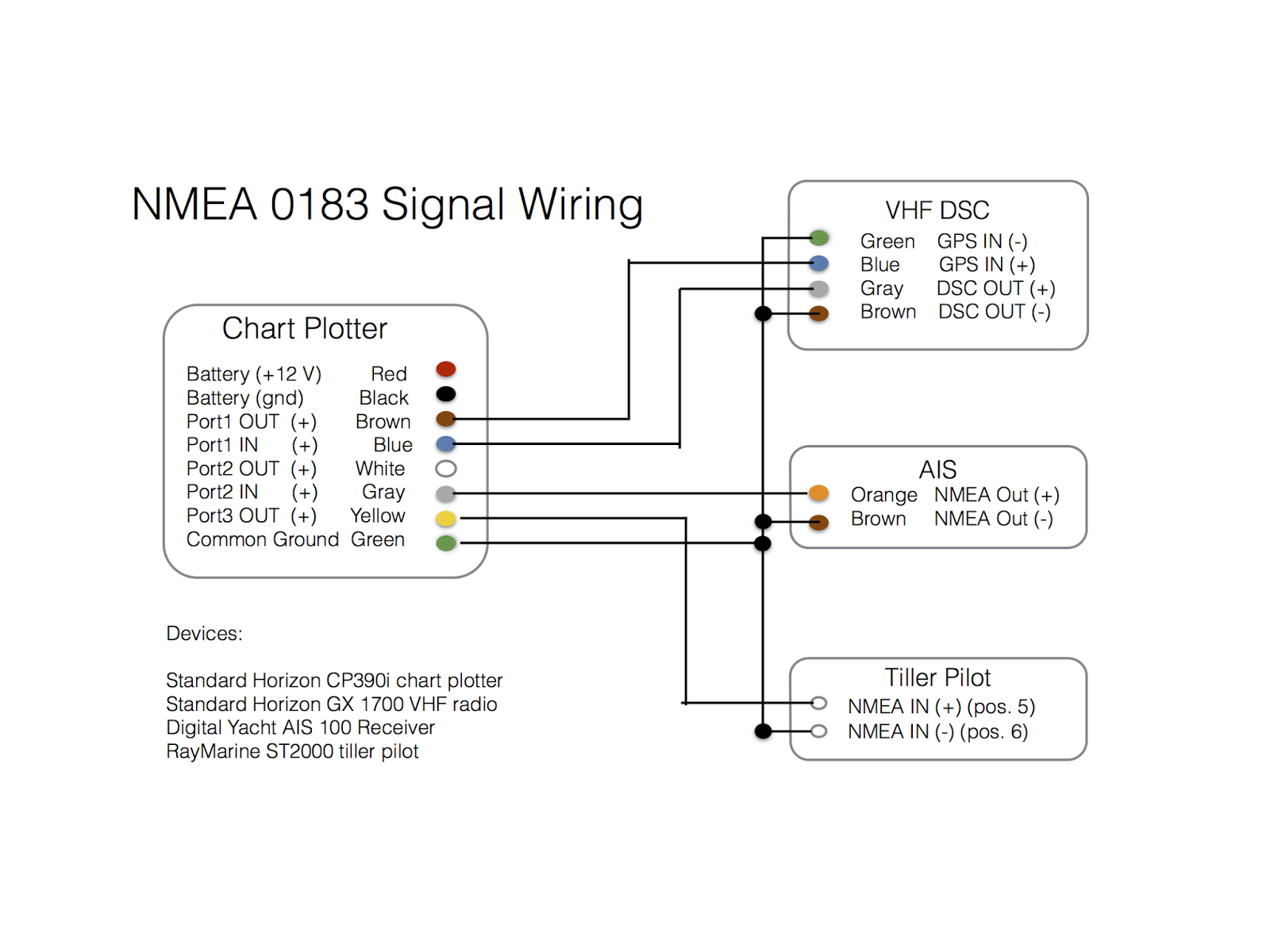 NOTE: An updated version of this posting that includes an AIS transceiver is now available here. Ripple's complement of communication and navigational electronics now includes:
Standard Horizon CP390i chart plotter Digital Yacht AIS receiver  Raymarine ST2000  tiller pilot Standard Horizon VHF/DSC radio These devices can all be networked, so installing them includes making decisions about whether and how to connect them.  As with most everything on a boat, there are tradeoffs.  The benefits of additional functionality are always at war with the unanticipated dangers of creeping elegance and the instability that arises from proliferating connections (natural failure points).

My four devices, like most modern electronics, can talk to one another using the well-established NMEA 0183 protocol.  NMEA 0183 falls short of a full-blown network, but it meets the need for point-to-point connections such as are appropriate to my configuration..  The NMEA 2000 protocol provides a full network…
Read more 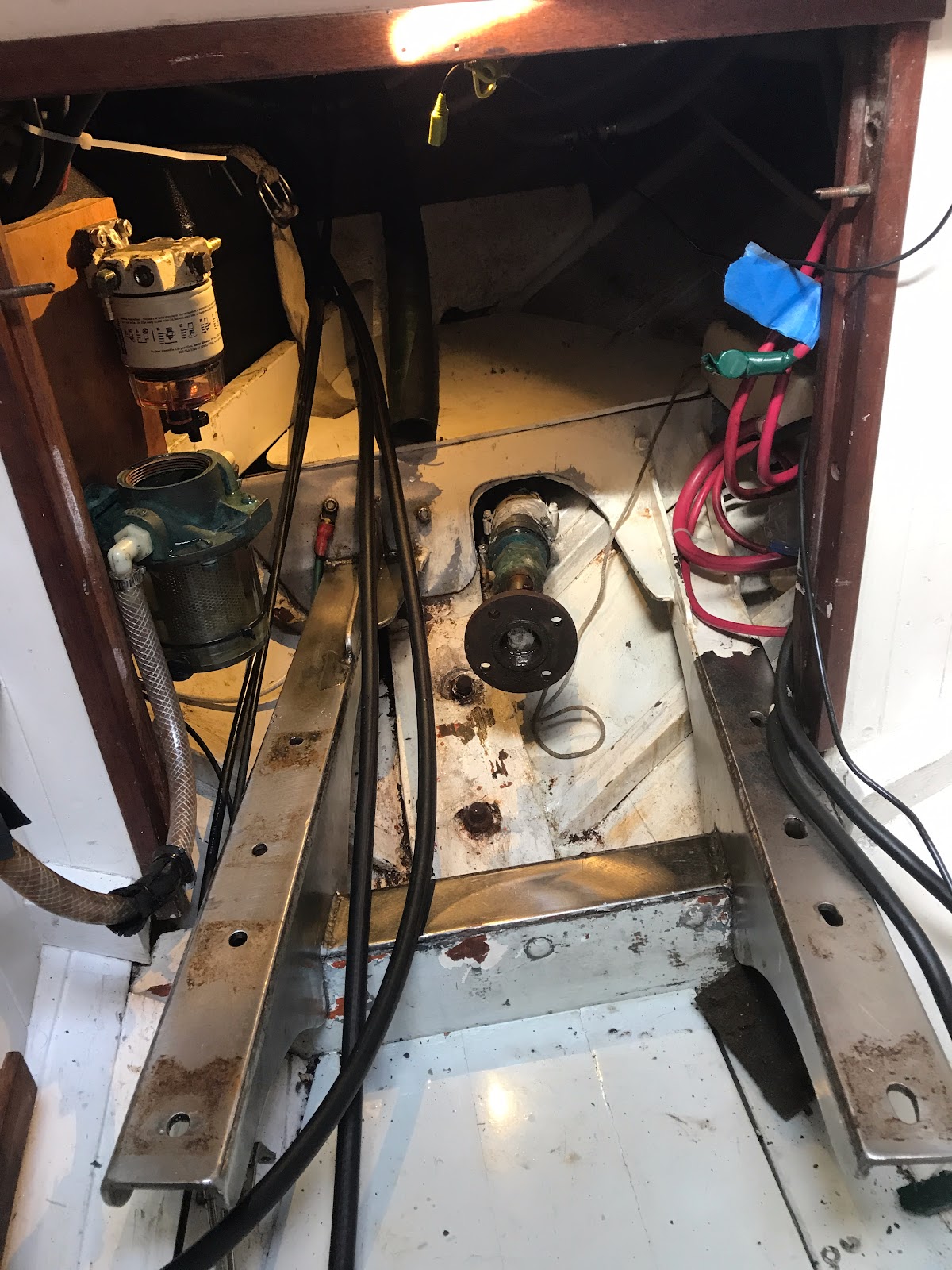 An irregular sound, a vibration untuned to the sum of your experience: this one was a momentary drop in RPM... 25, maybe 50 rpm. I bumped the throttle, right? Then it happened again, and denial shades into anxiety.

The opening hours of a 6 week cruise: Seattle, up the inside passage, over the top of Vancouver Island and a leisurely meandering through the inlets that indent the west side. But this journey ended just as it began.

A series of intricate diagnostic rationalizations, fuel filter and impeller changes availed us not at all. Lots of oil gone missing! Limping into Kingston Harbor, Ripple’s Yanmar 1GM10 turned the last of some 300,000,000 revolutions in my service.
Broken-hearted 1GM10
Only slowly did I surrender the hope of rebuilding my faithful one-lunger.  As it happens, Yanmar does not make an oversized piston for the engine, as they enlarged the size of the cylinder when the 1GM transitioned to the 1GM10, and given that the water jacket for the block …
Read more 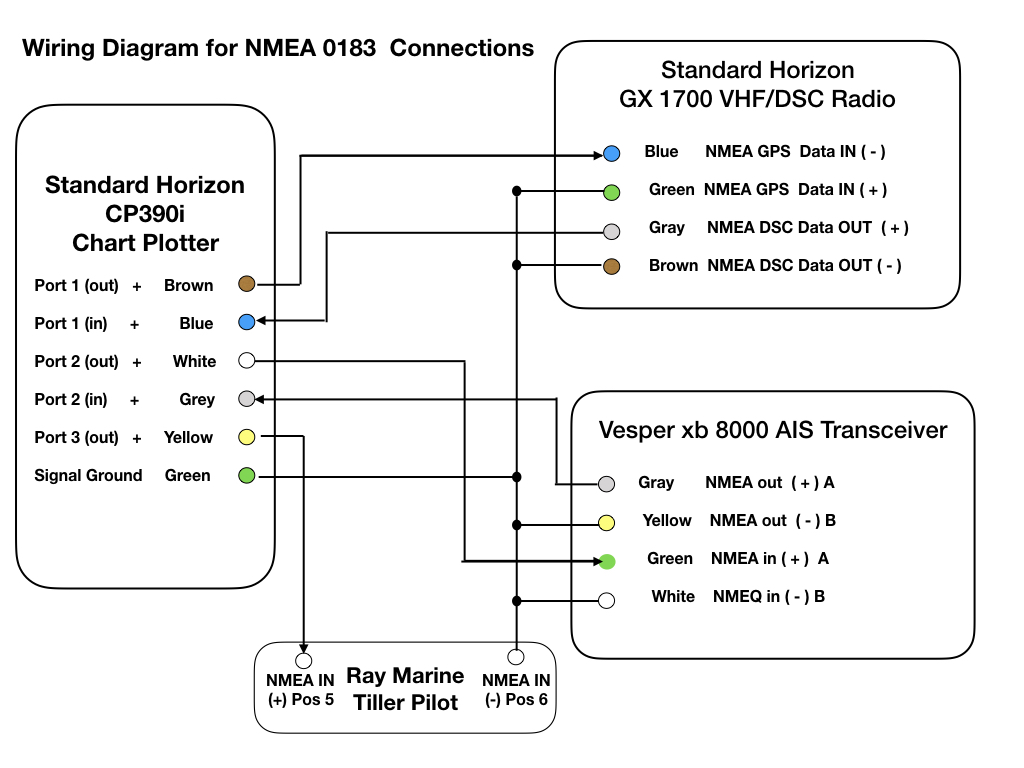 In 2015 I purchased an AIS receiver for a trip up the Inside Passage.  This posting is largely an upgrade of the posting for that installation. I suspected at the time I might look back on purchasing only a receiver as a false economy, and that turned out to be the case. I want to be SEEN as well as to see others. This year I purchased a Vesper XB 8000 AIS transceiver to replace the perfectly functional Digital Yacht AIS receiver that I had benefitted from over the previous three seasons.

My decision to go with Vesper was based on the reputation of their product and their customer service, and also because the device makes the data on my network visible via a WiFi gateway.  This should make it easier to pull off tracking and route data, and to display AIS targets on tablet or phone as well as the chart plotter. The XB-8000 also provides an easily managed anchor alarm, accessible by tablet or smart phone.  I won't have to sit in the cockpit all night watching the chart plotter... …
Read more